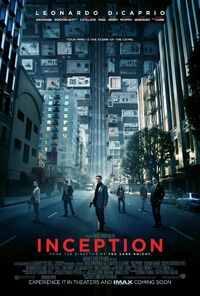 The Inception Wiki is a place where you can freely view and edit material pertaining to Christopher Nolan's latest film, Inception!

Inception is a sci-fi action-thriller written, produced, and directed by Christopher Nolan. It stars Leonardo DiCaprio, Joseph Gordon-Levitt, Elliot Page, Ken Watanabe, and Tom Hardy. It was made by Warner Bros. Entertainment, Inc. and was released on July 16th, 2010.

In the film, protagonist Dom Cobb (Leonardo DiCaprio) steals information from his targets by entering their dreams. He is wanted for his alleged role in his wife's murder and his only chance at redemption is to perform the impossible, an inception. 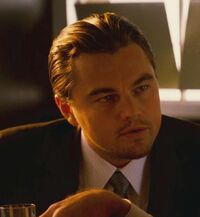 Dominick "Dom" Cobb is the main protagonist of Inception. Cobb is well known in the black market because of his level of expertise in the field of extraction, which consists of stealing his mark's ideas by infiltrating their dreams and stealing valuable information from them.

Wanted as a fugitive for being falsely implicated for the death of his wife, Mal, Cobb is unable to return to his home. As a totem, he uses a spinning top that was once owned by Mal. He uses a Beretta Px4 Storm consistently throughout the film, also using a suppressed Blaser R93 LRS2 sniper rifle during the third level of the the Fischer inception job. He is portrayed by Leonardo DiCaprio.

To whom this may concern,

I am rewatching "Inception" about once a week, sometimes more in the last month. I am either trapped by the music or the visuals, or maybe a little bit of both.

I recently discovered the Edith Piaf so…

Retrieved from "https://inception.fandom.com/wiki/Inception_Wiki?oldid=13812"
Community content is available under CC-BY-SA unless otherwise noted.